A CHINA-BASED SCHOLAR SPEAKS OUT AGAINST PUTIN'S WAR 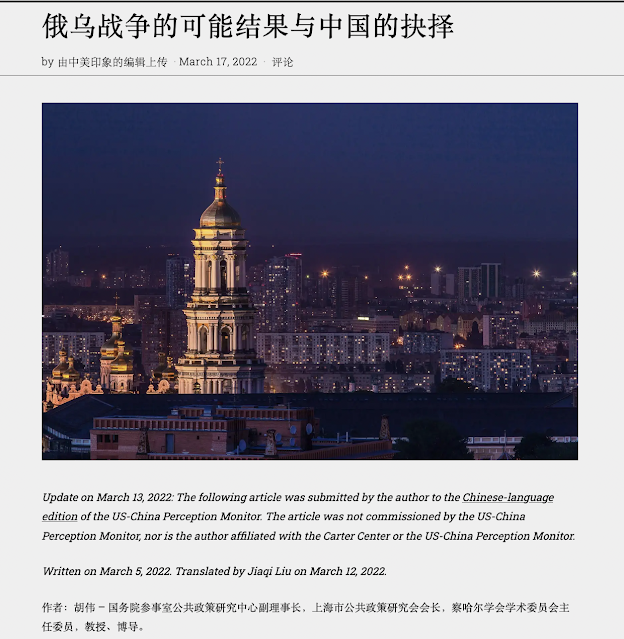 “Possible Outcomes of the Russo-Ukrainian War and China’s Choice” is the title of a thoughtful essay published by a Shanghai based scholar named Hu Wei. The article, which first appeared on the website of the Carter Center in Chinese, laid out the author’s reservations about China’s seeming embrace of Russia at a time of ruinous war.

To Chinese readers, it appeared in a bilingual publication known as “Zhongmei Guanxi” which publishes in English under the title “US-China Perception Monitor.”

Shortly after the Chinese original was uploaded, an English translation followed.

Hu Wei’s article was an unexpected hit, if it’s hits that one is looking for. It swelled traffic on the publication’s website in a way that no other article had ever done before, and eventually garnered over a million views, mostly in China.

At a time when China’s official media is hewing close to a pro-Russian narrative, often repeating the assertions made by Russian officials word-for-word,  the unexpected take-away from his long essay was that it was time to decouple: “China cannot be tied to Putin and needs to cut off ties as soon as possible.”

The optics of China backing Russia during its shocking war of aggression against the sovereign state of Ukraine are not good, and the threat of sanctions, which an unexpectedly unified West imposed on Russia in short order, could eventually be applied to China as well. “China should avoid playing both sides in the same boat,” Hu Wei said, adding that China should “give up being neutral and choose the mainstream position in the world.”

Although Hu Wei did not make any claim to represent Chinese officialdom, saying this article “does not reflect the view of any party” he is reasonably well-placed in the state bureaucracy and is a respected scholar. Articles such as his are commonly distributed among officials for deliberation and debate.

Hu Wei studied at Fudan University under the influential theorist Wang Huning and later became a professor at Jiaotong University in Shanghai. Hu Wei was once close to Wang Huning, who has served in the administrations of Jiang Zemin, Hu Jintao and Xi Jinping and is currently a member of the Politburo Standing Committee.

Hu was once close to his teacher Wang Huning but it is not known if they are still in touch since the latter has to abide by the protocol of his high-power position.

Any expectation that Hu Wei’s lone voice in the wilderness represented a possible change in thinking on the part of the Chinese government was shot down when his article was erased from China’s internet and his article was denounced as “dangerous and reckless.”

The Carter Foundation, which proudly reflects the bridge-building tradition of President Jimmy Carter on whose watch full diplomatic relations were established between the US and China, suddenly found itself a “pariah” on account of the Hu Wei article. Western news publications are by now familiar with the cat-and-mouse game of China’s censors by which individual articles are blocked, and sometimes entire websites, rendering them invisible in China outside of VPN users who can, with effort, circumvent much of the information control.

But for the publication of a foundation such as the Carter Center, which shares with The National Council on US-China Relations, the US-China Friendship Association and China-US Focus a mission expressly dedicated to US-China ties, the blow comes a bit unexpected.

“I regret to share that both our English- and Chinese-language websites are now completely inaccessible in China, but we at @uscnpm do not regret publishing Hu Wei’s voice on China’s approach to #Ukraine.”

The editor’s dream of publishing a viral article was followed by the editor’s nightmare of having one’s site closed down in its most vital market.

The current level of tensions between US and China put editor Liu in a difficult position. On the one hand he wants to offer a platform for scholars on the mainland to express themselves, but on the other hand, he doesn’t want to get anyone in trouble.

And as is sadly too often the case these days, no sooner did the article take flight, than he started getting hate mail. Here is an example of an anonymous attack posted in Chinese on the Carter Center Twitter feed:

History will remember who is who and who is not.”

When dealing with China, where the protection of free speech remains tenuous, journalistic integrity is not just about daring to publish challenging pieces and letting writers speak out but also finding the right tone and making an effort to protect contributors.

“The following article was submitted by the author to the Chinese-language edition of the US-China Perception Monitor. The article was not commissioned by us, nor is the author affiliated with the Carter Center or the website.”

Finally, Liu Yawei, speaking in his own voice, got in what may well be construed the last word on the topic, at least for now.

“Great powers do not punish their own scholars for disagreeing with their official policies.”