LOST IN THE PARALLEL UNIVERSE OF THE BEIJING MEDIA SPHERE 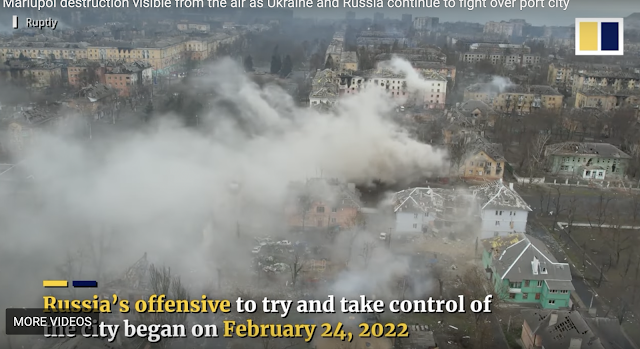 Ever since February 24, the day Russian troops crossed the Ukraine border and began firing missiles and dropping bombs, Beijing has had to balance itself on a narrative tightrope based on its twin policy of leaning towards Russia and away from the US.

While much of the world’s media has tuned into the tragic and heroic spectacle of outnumbered and outgunned Ukrainian defenders trying to outfox the Russian invaders, the Beijing media sphere has created a parallel universe where the Russians are the good guys and the real villains are the US, Britain and Nato.

In the Chinese narrative, Ukraine is granted little or no agency. The CCTV graphics department, for example, posts maps in which Ukraine doesn’t have borders, as if it were not really a country.

Given Beijing’s hyper vigilance about maps that don’t include Taiwan, this is lazy, if not careless. It inadvertently accords with Russia’s contempt for the idea of Ukraine as a country at all. The undrawn borders also avoid the map conundrum about how to delineate Crimea and the Donbas region.

CCTV and other mainland media have had to bend over backwards to produce Ukraine content in keeping with guidelines. It’s so hard that many Chinese TV producers appear to have given up trying and instead import the news directly from Moscow, following the lead of the Kremlin news releases.

Although the leaders of Russia and China might not be best friends for much longer, for the time being, Beijing is playing a tricky game of avoiding material support for Russia while giving Russian President Vladimir Putin everything he wants in media terms.

Almost every day in the CCTV news cycle, at least one Russian politician is given precious airtime. There have been days when it looked like Izvestia and Russia Today had been invited to guest-host CCTV News.

In addition, CCTV has relied heavily on the Russian Defence Ministry for comments from spokesman Igor Konashenkov and reports from camera crews embedded with Russian troops in Ukraine. Colourful stock views of the Kremlin, Red Square, Arbat Street and various ministry buildings are nightly fare on CCTV as it translates and posts Russian state media releases without comment or question.

Some of the material has editorial value, offering insights into how Russia defends its unilateral thrust into Ukraine to itself and the world. However, the CCTV copycats swallow it without a murmur of disagreement.

But that is only the passive half of the narrative strategy. The active half is to relentlessly blame Nato and the US. Chinese outlets have repeatedly insisted that the transatlantic alliance “forced” Russia to take action against Ukraine. The way they show it, guileless viewers in mainland China might well believe Russia is the victim here.

One suspects that the twisted logic and verbal gymnastics may be distasteful even to CCTV’s veteran news readers and stable of military and political guest commentators, despite their acquired expertise of massaging the news to fit party dictates.

The early thrust was to blame everything on the eastward expansion of Nato. A more recent variation on that theme is blaming its northern expansion now that Finland and Sweden are considering joining the alliance.

Another strategy to distract from the fact Russia initiated the war while Nato sat on the sidelines is to emphasise the flow of weapons into Ukraine. Western news agency photos of weapons being unloaded in Poland are a staple visual on CCTV, as is file footage of the forbidding-looking Nato headquarters in Brussels.

The foreign intervention argument has intensified, with footage of prisoners of war captured by Russia, including a handful of Britons. That tens of thousands of Russians have entered Ukraine, guns in hand, is left unsaid. Since the start of hostilities, both Russia and China have shared media taboos stipulating that the war is not to be described as such, and the word “invasion” is not to appear at all.

It is Orwellian to disappear words and deny something in plain sight, but it also serves other purposes. Russian revanchism sees Ukraine as a land it is free to plunder, which does not construe an invasion. By not calling the war a war, Moscow also has a plausible excuse for slow progress and even stunning losses, such as the sinking of the flagship Moskva.

The implication is that Russia would win easily if it was really fighting a war, but this is just a “special military operation”. China goes along with this ruse, content to characterise the whole mess as the “Ukraine situation” devoid of cause or effect.

To date, the strongest language CCTV has used is “conflict,” but that is changing. This week, it introduced a sly new narrative suggesting the “conflict” can be pinned on Western media. A CCTV reporter in Moscow is shown on CCTV-13’s report of April 18 asking questions about the Western media’s “invasion” of Ukraine. Such is the Orwellian universe that Beijing wants true believers to accept.