CCTV: COVERING THE NEWS FROM BUCHA OR COVERING IT UP?

CCTV's "neutral" and self-styled "humanitarian" coverage of the Bucha massacre on April 4, 2022 was more baffling than balanced. CTTV 4 is a Chinese-language channel nominally directed at an overseas audience and has a reputation for being more "open" and fact-based than the stodgy domestic news service. 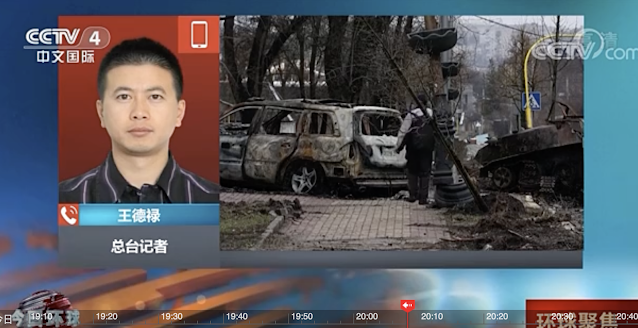 Still, it has a long way to go to earn journalistic credibility.

In keeping with Beijing party line, there is no mention of a massacre, just as there is no Russia invasion and no war. The "Bucha incident" is one of those things, a contentious event contested by both sides, CCTV tells us, while giving considerable credence to Russian shameless lies and denials. 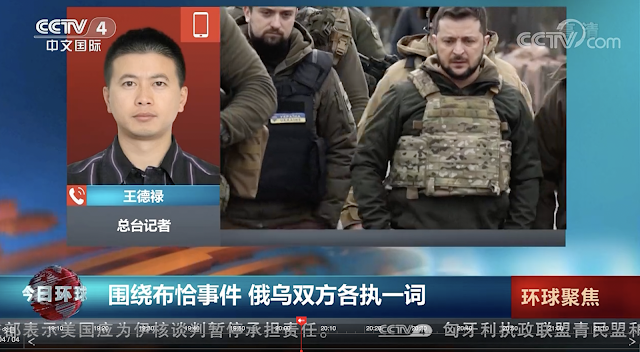 Perhaps the biggest breakthrough for CCTV, partisan cheerleader for team Russia and from whose airwaves Zelensky has been minimized, is that Zelensky is shown at all, let alone in Bucha. Perhaps the CCTV reporters and producers are feeling the stress of leaning too far to one side for too long. They are not stupid, but they have to comply with guidance from above.

Caption: Ukraine President: “It has become harder to negotiate with the Russian side" 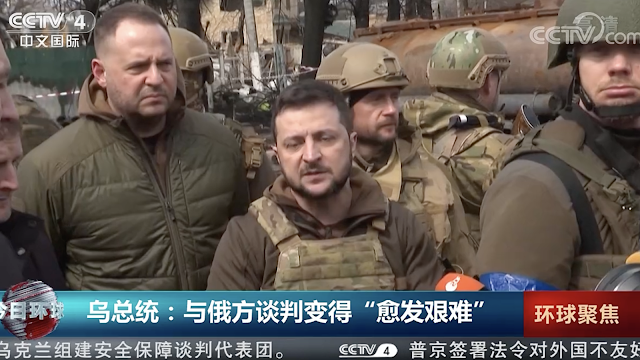 More general scenes of damage are shown. The absence of bodies is not necessarily a case of censorship, or deliberate massacre-denial, but is in keeping with CCTV's style-book and desire to maintain an upbeat style. Then again, suppressing unpalatable truths in service of keeping the news about Russia positive and the Xi-Putin bromance in good stead may be construed as a calculated deception, a lie of omission. 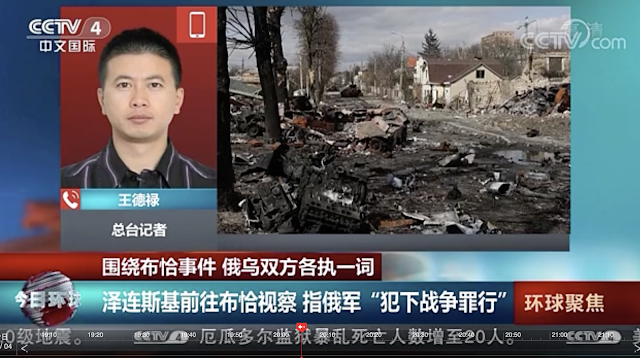 CCTV shows one or two blurred and cropped photos from Western news services of alleged atrocities while giving air to Peskov's denial that it is fake news.

The well-documented case of the random bicycle victim of Russian violence is partially shown below. 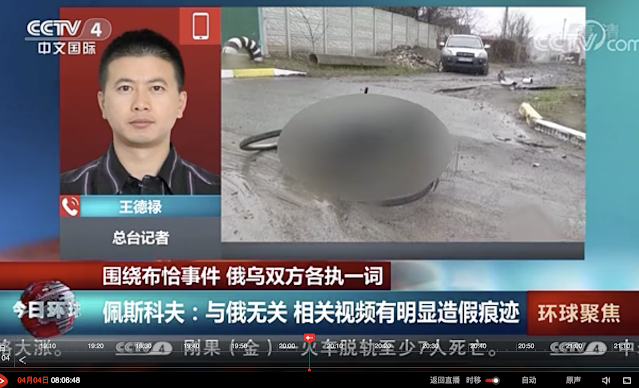 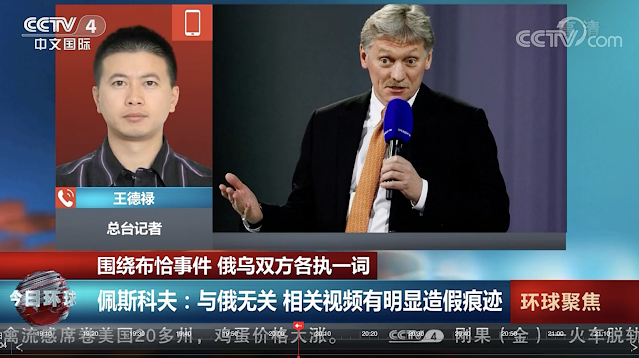 Russian Foreign Ministry's Maria Zakharova adds that the so-called Bucha incident is a "provocation" whipped up by US and NATO. 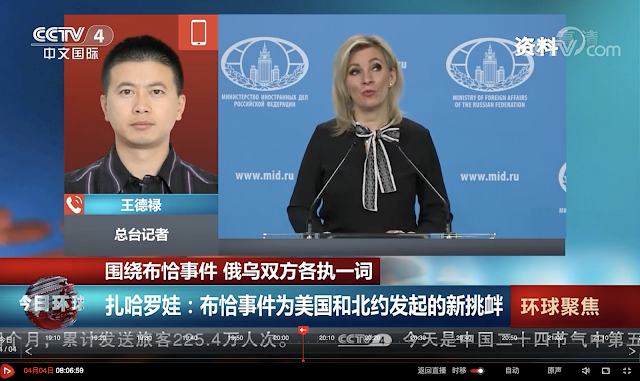 CCTV reporter Wang Delu, pictured on the screen above, may be posted in the field, but he’s treated as a prop and we don't really hear from him or get any sense that any real reporting took place. Instead the show follows a strict Beijing script in keeping with the CCP's lean-to-Russia mindset.

In the mind of China's paramount leader, Russia can do no wrong, and America can do no right. The fact that Russia is invading and pillaging a neighboring country, while the US has restricted itself to supporting Ukraine from the sidelines, is one of those inconvenient facts that China's truth-twisters in the Foreign Ministry, Xinhua and CCTV are busy at work on.

As Putin, Lavrov, Peskov and Zakharova have shown again and again, lies don't even have to be believable to be effective.